She opened her eyes and felt the caress of the leaves of her big tree. She stretched her arms and touched the leaves, such a lovely feeling. She could never get enough of the sensation of the greenery. She looked up and watched the circling of the eagles. They had been everywhere on this journey. India seemed to be full of them. She could not get enough of these birds of prey. She closed her eyes again and allowed her inner conversations to take over. Was she a predator? Was that why she felt a connection with the eagles? Or was she the prey, as deep down she actually wanted to be captured? Was it like that? Rather, life was full of continuous transformations. At times she was predator and at times she was prey. She was a different being at different times, depending on the situation. She needed that, deeply.

She realised that her yearning to be with birds had grown beyond the birds of prey. A variety of birds had started to kindle her. She had even opened to the screeching crows, of which there were so many in India, though she still found their shrieking rough. Back home most people would chase them away. In India, however, crows were believed to be our ancestors. It had made her look at crows in a totally new way. What if her dad was hopping about? The other day she had engaged in an inner conversation with one of them, whilst it was prowling around at lunchtime.

She opened her eyes again. She wanted to continue to embrace the moment and take in these particular woods of wonder, such a mesmerising place, part of a coffee and tea plantation in the beautiful state of Kerala. It was such a blessing that wherever she went in the world, she was able to find woods of wonder and a big tree ready to receive her. She experienced a deep sense of gratitude, like a shiver through her spine. She felt the need to hold on to this sensation for a little while longer. In her everyday hectic life she found it hard to build in these meditative moments on a structural basis. However, she wanted to make sure that when she got back from this journey, she would. 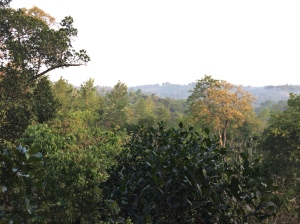 Then she remembered her last visit to the woods of wonder and remembered her dream. She recalled that the woods had turned the bird of prey into a badger. However, the badger had been a phantom. The bird of prey had stayed intact. She was actually quite happy about that. She realised the woods of wonder’s message to her had been to deal with reality rather than changing it. If only she could get back into the trance she had felt that time. It had been so vivid that time. There had been such an edge to the ‘up in the air dance’, one that seemed to be reserved for birds of prey only. Over the last months the stimulus to get up into the air had come back to her repeatedly. She felt it was time to immerse.

Could she keep on transforming from human into bird, into fish and back into human? There was an anxiety inside of her that one day she might remain one of the three, whereas all different forms brought her pleasure and fulfillment. Sure, her foundation was human. The other forms were additional, offering transcendence. The on-going changes were very fulfilling, giving her a sense of being complete.

She should rise. She knew she needed to get to another level of transformation. It was about focus, tackling goals and dealing with any obstacles along the way. She raised her head above the leaves and looked around. No sign of anyone or anything. The woods of wonder were quiet. She slid down her big tree and started to walk. The walking felt a bit awkward and her legs had a strange itch. She looked down and noticed the skin on her legs started to show scales. She needed to get into the water. She knew it. She had postponed it for too long. There had been no need. She had been happy in the woods embracing the reality there but equally, she had been keen not to send the wrong signals to the purple fish. He could have interpreted her dive as a search for him, whereas all she needed was the water environment. Enough (of him) now, it was time to get in and swim into the reality of the underwater world.

She got to the side of the water and stopped. She looked up, part of her ritual. She had to scan the sky for birds of prey before diving in. The sky was clear, no signs of any bird anywhere. Not sure how she felt about that. Was that making her feel good or a little empty? No time to ponder though, she needed to get in before it was too late. Her legs already started to feel heavy, tail-like.

She dived in. What a wonderful feeling! Gosh, she had missed this. It was as if she was being kissed all over, the water stroking her, the ocean taking her completely. She was human mermaid again. She spun along, immersing herself completely; giving in to a total surrender. The water dance was another form of meditation. It got her into a kind of trance, allowing her to explore her subconscious in every possible way. It was like medicine. The itching skin and vague showing of scales were signs that it was time to get back into the water. Water spinning supported her health.

After quite a period of whirling in the water, she opened her eyes. She felt as if she got a slap in her face. She found herself surrounded by an enormous number of purple fish. What was this? They all smiled at her with drowsy eyes. They were all so similar. How spooky! Last time she had been swimming with that particular purple fish, the one that had seemed so special, so different to other species. Yet, now it seemed he was just one of many. Maybe she should see if she could spot him among this purple lot? There was an inner urge to find out what had been so special, so attractive about this particular fish? But then, why would she? She had moved on after all and had come to the realisation that the experience had not been that distinct after all. It was as if that belief was strengthened by the presence of all these purple fish, that seemed to function as aligned communal beings. She decided to watch this purple plenty for a bit and go with the flow.

Soon enough, she felt she had ample observation of the purple plenty, and felt the need to move on. She sensed the satisfaction deep in her skin. It was time to continue along the path of transformation. Time to embrace the next goal of the day. The water immersion had only been the starter of something much larger, but it felt complete now. Her scales would stay away for a while.

She got to the surface and lay down on the sand to dry. She looked up. Still clear skies. No birds on the horizon. Looked like it was going to be a calm day.

When the last scale had disappeared, she got up and started to walk, but slowly. After swimming it always took her a little while before she was able to walk steadily. Her thoughts started to float. So she enjoyed the company of others, in a variety of forms. Why had she even considered giving that up? What is loyalty really about? Is loyalty about being loyal to others or being loyal to self? She had to stay true to her core. Different species provided her different sustenance for thought and inspiration. The company of the bird of prey challenged her in one way, the dancing peacock in another. There was the Black Panther, steady in one way, but quite shaky in another. She could not get enough of its poetic roar, or of its velvety fur. The way her feathers and his fur could intertwine felt transcendental. The purple fish had confronted her, forced her to question her core beliefs and values. Why had she given into that temptation? Deep down she knew. She loved to be challenged and was always open to consider new ventures. Why, however, had she considered walking a path that was clearly not hers to walk? She would need to give that more thinking, at conscious and subconscious levels.

But that would have to be next time, in the next dream, because right now she felt the calling of the wind. Yes, she was ready. “Take me with you, wild wind!” she cried, as the song echoed through her heart.

“Let me fly away with you.
We are creatures of the wind.
Wild is the wind.
Give me more than one caress.
Satisfy this hungriness.“

The wind lifted her up. She felt the embrace. She spread her wings. She was eagle.

A change agent, I am driven by passion, sustainability and justice, bringing experience from the business world as well as civil society. I do so through my own consultancy The Butterfly Effect - strategies for transformation: www.butterflyeffect.io. I'm a book and dance lover. I am writing my first novel and write poetry.